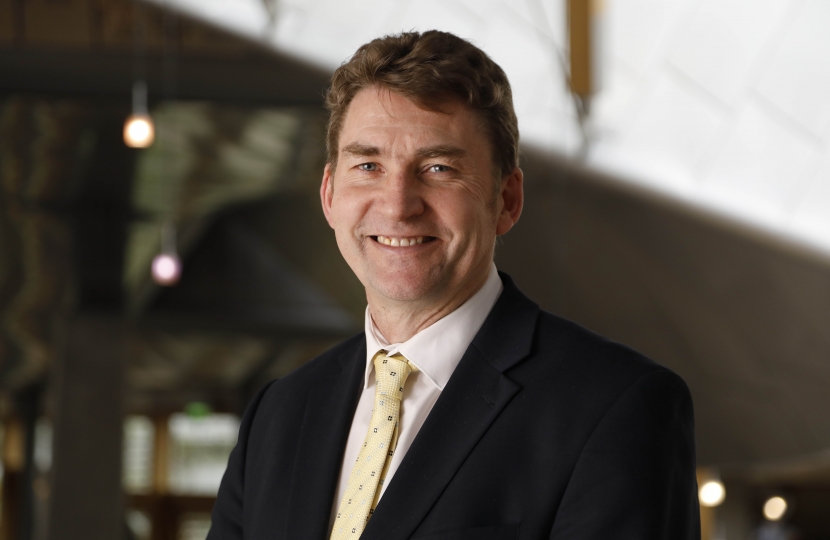 The South Scotland MSP, who was recently made the Scottish Conservative spokesman for Environment, Biodiversity & Land Reform, used a debate on the climate emergency to push back against arguments that investing in roads isn’t appropriate in the face of climate change.

Brian believes that calls by the Scottish Greens to abandon any new road building fails to recognise the opportunities that investment in trunk roads like the A77 could bring to benefit the environment and the economy. Among Brian’s proposals are making fast charging points and hydrogen filling stations at key points like the Bellfield Interchange as part of any package of improvements to the route as well as developing a cycle route down the coast to Stranraer.

Both the Scottish and UK Governments have committed to phasing out fossil fuel vehicles in the coming years and Brian says that getting the right infrastructure is key to encouraging people to switch to zero-emission vehicles. He argues that by getting people to change what fuels their cars, we can reduce air pollution and carbon emissions without putting those who need a car at a disadvantage because active travel or public transport aren’t always a suitable alternative.

“When it comes to the future of transport, getting caught up in the idea that roads are inherently bad and we should all be using public transport is a mistake. For many people, especially those living outside cities, public transport can’t replace the car. In much the same way, HGVs, vans and other commercial vehicles can’t be taken off the road.

It’s not the vehicles themselves that are the problem, it’s what fuels them. If we want the public to see electric or hydrogen powered vehicles as a credible alternative to petrol and diesel, we need to get the infrastructure in place to support that.

A location like the Bellfield Interchange, which is already a hub for traffic moving across Ayrshire and North to Glasgow, should be a prime candidate for more fast charging points and a hydrogen filling station.

After so many years of being behind the curve for investment, it’s time for South West Scotland to take the lead with green transport links.”

Local MSP Brian Whittle has welcomed his appointment to the Holyrood Committee that will lead the scrutiny of Scotland’s recovery from the pandemic.